Singing With Your Whole Self: a guide to Feldenkrais and singing - BAST - Be A Singing Teacher Skip to content

Singing With Your Whole Self: a guide to Feldenkrais and singing 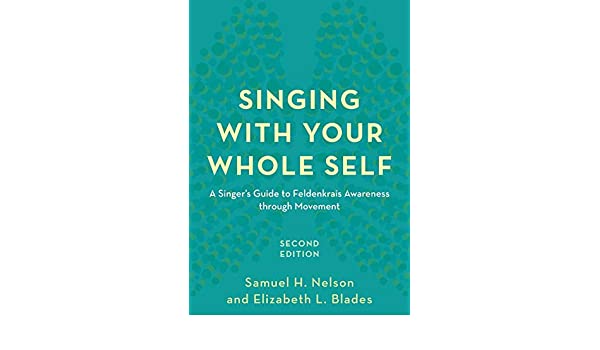 Singing With Your Whole Self: a guide to Feldenkrais and singing

Looking for a how-to guide on the Feldenkrais Method and singing? If so, grab yourself a copy of Singing With Your Whole Self: A Singer’s Guide to Feldenkrais Awareness through Movement, writes Alexa Terry.

“How does one develop an internal feel for what sounds good? How do you learn to use all of yourself when singing? What is the relationship between the felt (kinaesthetic) sense, effort, and good sound?” (Samuel H. Nelson and Elizabeth L. Blades, authors of Singing with Your Whole Self: A Singer’s Guide to Feldenkrais Awareness through Movement)

Mechanic, physicist and judo black belt Moshe Feldenkrais founded the Feldenkrais Method after a chronic knee injury threatened to consign him to a wheelchair.

He used his knowledge of engineering and physics to create a body-centred system to increase self-awareness and encourage efficient body movement.

Feldenkrais techniques help us to consider our bodies less like a foreign vessel, and more as a conscious part of our self. Therefore, as singing includes the whole body, the Feldenkrais Method can be applied to the singer.

It can help singers to pair effortless internal sensations (often described as the feeling of ‘nothing’) to their desired product.

Vocal coaches who are eager to learn how to incorporate Feldenkrais into their teaching should start with a copy of Singing with Your Whole Self by Samuel H. Nelson and Elizabeth L. Blades.

Samuel H. Nelson is a Feldenkrais practitioner who runs a private practice in the US and teaches at several institutes. Elizabeth L Blades is a renowned music professor and voice researcher.

Nelson and Blades are the authors of two separate works. He wrote Playing with the Entire Self: Feldenkrais Method and Musicians. She’s the author of A Spectrum of Voices: Prominent American Voice Teachers Discuss the Teaching of Singing. Their joint effort, Singing With Your Whole Self, was first published in 2001. The second edition followed 17 years later.

This book is an eye-opening insight into the holistic interrelation of human anatomy and its impacts on singing. It acts as a friendly Feldenkrais tour-guide and details techniques you can easily apply in a voice lesson. My volume will be dog-eared from much use.

What this book is and is not

This book is not:

Stepping into the pages

Warning: Don’t try these out on your unwilling or sceptical husband/wife/partner; arguments may ensue.

The Feldenkrais Method can act as a singer’s interpreter to help them communicate with their own body. This way, the individual is guided by their sensations and experiences and not dictated by a second body (the teacher) or vocal myths. Using exercises like the ones described in Singing With Your Whole Self can help turn responses such as ‘how did that feel?’ from a measly ‘okay’ into something more comprehensive.

The ATM exercises are suitable for group and choir scenarios and one-to-one sessions. The authors describe them as “simple, gentle, pleasant and fun”. All of which I agree with – except maybe the latter. I can’t say the exercises filled me with much excitement. The repetitive nature was a little dull, regardless of the insightful exploration or result of the activity. Perhaps this was due to working solo. In a team setting, the exercises may feel more enjoyable.

Through their descriptions of how anatomical structures are interlinked, Nelson and Blades have produced a guide useful in finding a fitting vocal diagnostic. The co-authors have succeeded in their intentions of presenting an accessible handbook to be used into the vocal lesson. It will be a trusty sidekick in my practice.

–  Awareness Through Movement by Moshe Feldenkrais.

–  Musicophilia by Oliver Sacks – A book based on the relationship between the brain and music.

–  The Brain That Changes Itself: Stories of Personal Triumph from the Frontiers of Brain Science by Norman Doidge.

–  The Brain’s Way of Healing: Remarkable Discoveries and Recoveries from the Frontiers of Neuroplasticity by Norman Doidge.

–  How Feldenkrais Can Help Singers. Article published by iSing Magazine.