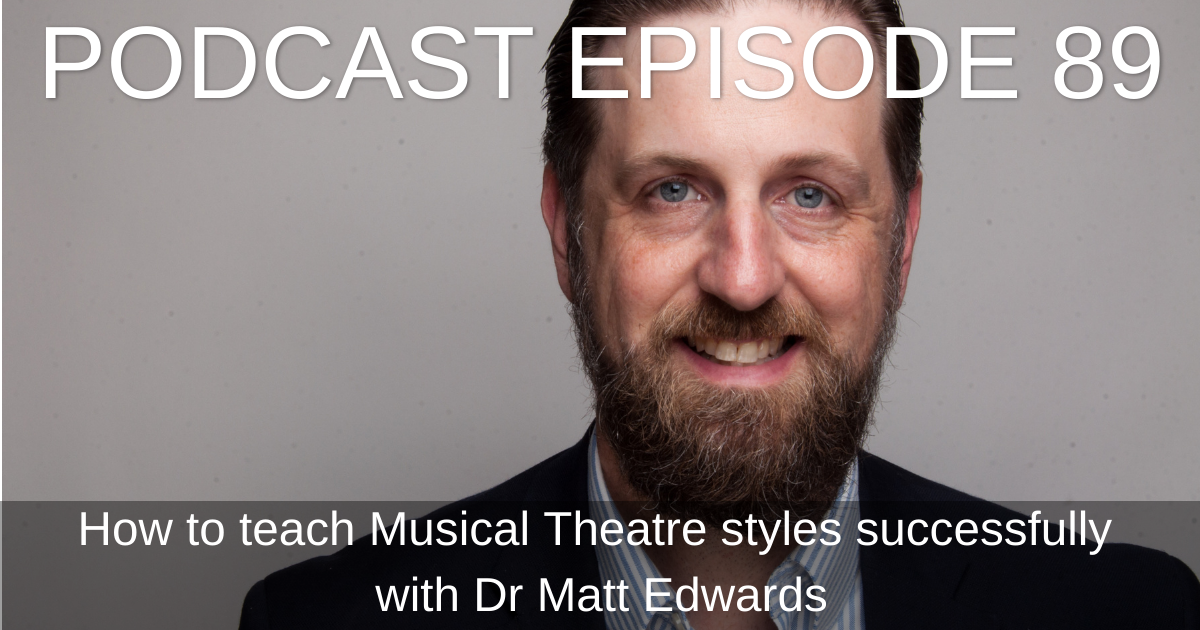 Today’s guest is the Associate Professor of Voice and Theatre, Coordinator of Musical Theatre Voice Training and Artistic Director of the CCM Vocal Pedagogy Institute of the Shenandoah Conservatory. He has written articles for the Journal of Singing and has contributed to The Manual of Singing Voice Rehabilitation by Leda Scearce and the So You Want to Sing series by NATS. Dr Matthew Edwards is on the podcast to talk about teaching musical theatre styles.

‘It doesn’t have to be in depth about understanding every muscle name, but just that basic biomechanics of how the respiratory system works’

‘So to me, it’s about getting them to understand the basics so they can troubleshoot on their own’

‘Donors change as the economy changes’

Matt Edwards is currently an Associate Professor of Voice and Theatre, Coordinator of Musical Theatre Voice Training, and Artistic Director of the CCM Vocal Pedagogy Institute at Shenandoah Conservatory.

Edwards’ work lies at the intersection of identity, technique and artistry. He uses evidence-based techniques that coordinate the instrument and empower performers to communicate the human experience through song. Former and current students have performed on American Idol, Broadway, off-Broadway, national and international tours, national television, cruise ships, theme parks, bands touring throughout the world. He has written dozens of articles and book chapters for publications including the Journal of Singing, Journal of Voice, Vocal Athlete, Manual of Singing Voice Rehabilitation, Training Contemporary Commercial Singers and numerous editions of the So You Want to Sing book series. His book So You Want to Sing Rock ‘N’ Roll? is published by Rowman and Littlefield Publishing and was called “an authoritative text on rock ‘n’ roll singing” by Classical Singer magazine.