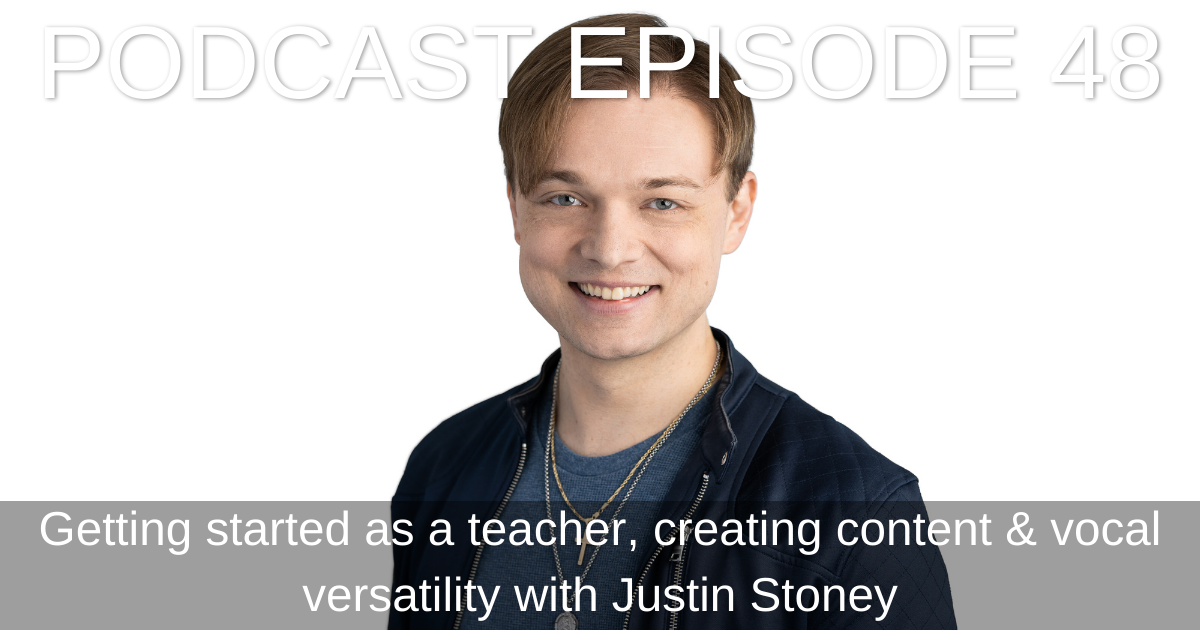 Ep.48 Getting Started As A Teacher, Creating Content and Vocal Versatility with Justin Stoney

Justin Stoney is the founder of New York Vocal Coaching, developer of the NYVC Voice Teacher Training Program, and author of the award-winning book Sing Like Never Before. His clients have included Emmy, Grammy, Oscar, and Tony Award-winning artists, and now he joins Alexa on this week’s Singing Teachers Talk. Find out about his incredible story of finding his way into teaching and get some great tips on creating content.

‘When one of the greatest casting directors in New York City tells you to have what it takes to be a great vocal coach, you listen’

‘The best teachers are just the best students’

‘I went into the arts to inspire and to give, with teaching that always happens’

Your Voice,  an Inside View by Scott Mccoy

Youtube (including Voice Lessons to the World & the David Phelps Series): youtube.com/user/NewYorkVocalCoaching

Justin Stoney is the Founder of New York Vocal Coaching, developer of the NYVC Voice Teacher Training Program, and author of the award-winning book Sing Like Never Before.

Justin has taught thousands of singers and voice teachers from around the world. His clients also include Emmy, Grammy, Oscar, and Tony Award-winning, artists. He has been invited as a presenter for lectures and workshops both nationally and internationally for numerous conferences, appeared on multiple media outlets, including NBC, CBS, and ABC, and been featured in multiple publications, including The New York Times, Esquire, and SELF. He is a member of NATS, VIP, PAVA, VASTA, The Voice Foundation, Actors’ Equity, and SAG-AFTRA. Justin also collaborates with leading voice doctors and laryngologists to help bridge the gap between vocal pedagogy and voice medicine.

Justin is devoted to helping all people “Make A Joyful Noise” and passionate about helping Voice Teachers develop their teaching gifts and inspiring them to approach Voice Teaching as a craft and art-form.