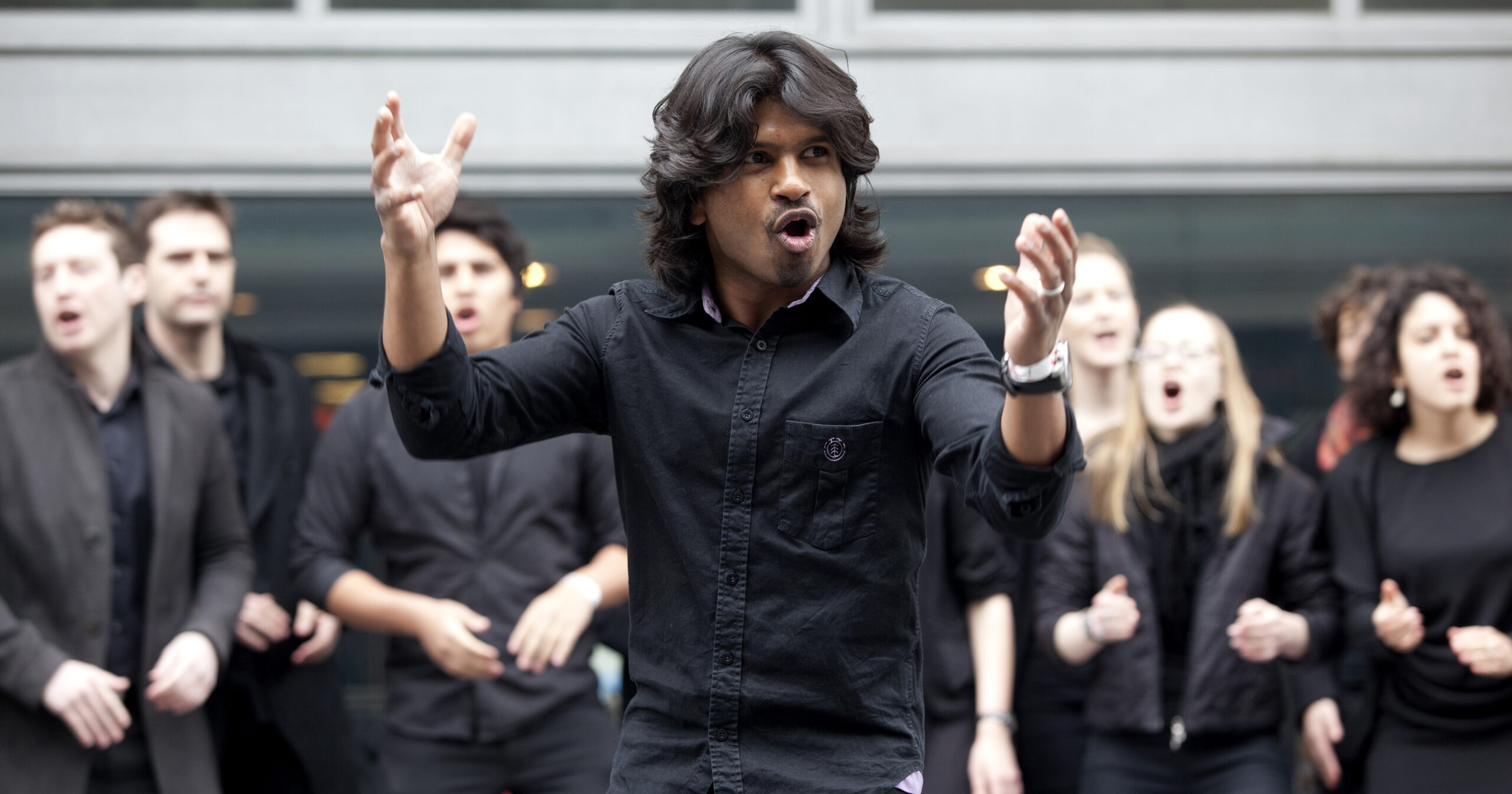 ‘Choir directors are an asset to society. What we do is about healing, and right now people need that,’ says choir director Naveen Arles.

Naveen Arles is the artistic director of the London International Gospel Choir, and the founder of MD Brunch, a platform where musical directors can network, exchange ideas and learn new skills.

The classically trained pianist, who is the son of missionaries, started his career working in theatre in Edinburgh and London before segueing into the world of ensemble music-making.

He’s since worked with London Metropolitan University, Grand Union Voices, New YVC and The Brandenburg Choral Festival. In 2018 he received the British Citizen Award for his contribution to community music.

Naveen spoke to BAST about working during the pandemic, imposter syndrome and motivating reluctant singers.

How have you kept busy during the pandemic?

I’ve mainly focused on MD Brunch. My big personal goal is to get it to a position where it has a recognisable place in the choiring world. I want it to be a safe place for people who work with choirs to come to learn and network and feel part of something.

Early on [in the pandemic] I acknowledged that this was going to be a bit crazy for everybody and that we needed to support musical directors (MDs) so that they could keep doing the work that they do.

Choir directors are an asset to society. What we do is about healing, and right now people need that. Week in, week out, after every rehearsal, MDs have people saying to them ‘this is the highlight of my week’, or ‘this keeps me sane’.

I know 2020 has been tough for many choir directors. Before the pandemic, many of us were quite happy in our box, but we’ve had to learn and adapt and improve our technical awareness and vary our approach. We need to find ways to keep working.

What will you take forward from the Covid-19 experience?

I’ve redesigned my understanding of what ensemble music-making looks like. My cancer choir, for example, has doubled in size during the pandemic. Why? Because [due to online rehearsals] they can stay on their couch and be involved wherever they are in the country. Before Covid-19, I didn’t really think about what somebody suffering from cancer goes through [to get to a choir session]. How rude of me. Why did I not think of that before?

From now on, my cancer choir will always have a virtual element. I will come out of this better designed to make music available to more people.

You started leading choirs at quite a young age. Did you ever experience imposter syndrome?

[Laughs] In the beginning, I must have been awful. And I absolutely felt that [imposter syndrome] up until about eight years ago – and I’ve been running choirs for 26 years.

I would describe myself as a nervous perfectionist; even now, I’m always on edge before a rehearsal.

I trained as a classical pianist, not a singer, and I’m always in the room with much better singers and musicians. But I have a responsibility to the people who I’m working with. Each one has dedicated two hours of their life and wants to take something away from the experience. I’m in service to them.

There’s another side to it too. I guess it’s about having a level of not caring about what people think, and this sense of child-like playfulness.

Growing up, I went to nine different schools in three different countries, so I’ve moved around a lot and been the new kid and learned to adapt.

When I walk into a room, I have no assumption that I’m not allowed to ask you what you think and talk to you. I don’t treat anyone in a special way; I just assume we’re all here to have as much fun as we can.

As part of your work with Liberty Choir, you go into prisons and encourage inmates to sing. What is that like?

It’s the thing I love doing most; it’s just so magical. One of the guys in my choir is a cage fighting enforcer, and he’s a lovely soul. I’ll have a cage fighter sitting next to a hedge fund manager (who’s inside for moving around some money); it’s hilarious.

It’s easy to make assumptions about who they are, but you realise that they are just men; some of them don’t want to sing, and they don’t know how to use their voices.

In many ways, it’s the same as working with any other choir – but getting in and out of the room is ridiculous. And when you’re in there, you have a whistle and an alarm.

How do you encourage prisoners – or anyone else for that matter – to sing if they don’t want to?

It goes back to my favourite analogy for music education. If you throw a ball into a circle of children, no group of children in the world will run up to the ball, sit down around it and discuss what they’re going to do. Instead, you throw the ball in and – boom! – the game happens. The rules emerge, and everyone just accepts it.

A lot of us spend a lot of time assuming there is a right way to behave. We forget what it’s like to be a child who makes friends with the person who is next to us in the sandpit.

I sometimes do these corporate workshops with senior-level bankers or hospital managers. My plan when I go in is that in a few hours, they will all be out in the lobby performing (although they don’t know that at the time).

I get them to a point where I’ve stripped away that self-consciousness, and all they’ve got left is silly playfulness. At that point, we start singing. Once we’re singing, I say: “Let’s go out and give a performance”. And they say “sure”.

If you had said to them two hours earlier “let’s go out and sing in front of your colleagues and a bunch of people who you don’t know”, I think they would throw furniture.

Predominantly what we do as singing teachers is get people’s heads out of the way, so that they can let their singing voice out.

Music is fundamental to us; it’s internal, visceral. It’s how we communicated with our mothers from the first seconds we were born. The question is always: how can we tap into that?