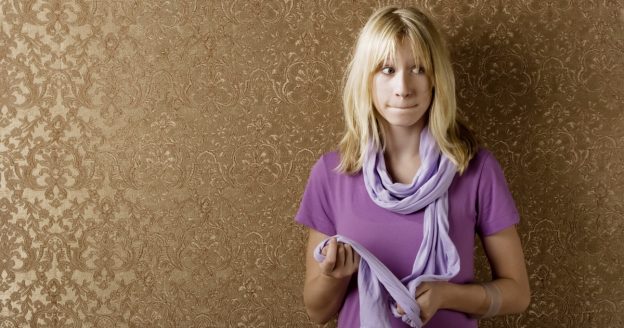 Imagine this: a new client, 13-year old Polly Peters, arrives promptly for her singing lesson. As you  welcome her to your studio you notice her clinging to the sleeve of her jumper and presenting a stiff posture. Polly’s jaw pulses as she chews the corner of her mouth, and when you ask a question you are either met with a nervous giggle or a softly spoken answer, breathy in tone. For some, singing lessons can be rather exposing and you sense Polly’s apprehension. You ask her how her friends and family would describe her, and she replies: “urm – quiet, funny and hard-working.” She begins to sing in a way which twins her speaking voice, and she stops after a verse – her cheeks flushed.

With a cherrywood pipe smoking at our lips (it’s just a prop!) we can make note of some initial clues which might help us compose an appropriate plan:

So, how might we begin to work with Polly?

It’s clear that Polly has a shy and nervous disposition – rather opposite of our Sally Simpson character from our first case study blog. Considering the trait descriptions she believes her friends and family would assign her, we could conclude that timidness is universal in her life, rather than it being exclusively first lesson jitters. With this in mind, the stiff posture, breathy tone and jaw clenching could all be a result of personality type rather than fixed vocal habits.

Therefore, we might need to call on some of the following:

Out comes the Straw:

Not only one of the best things since sliced bread (this blog has been written in the company of hunger pangs – can’t you tell?) but, due to it’s semi-occlusion of the vocal tract, singing through a straw is almost inaudible (which is why it’s perfect for those public transport warm-ups!) Getting Polly making sound through the straw may not be as scary for her compared to singing full sections of song out loud. Not only will she be making sound with, potentially, more confidence, but she may also experience the added straw perks of better laryngeal set-up and a more energised tone with no added effort. Plus – it can be fun, especially if you add a bottle of water to the mix and make a game out of blowing bubbles.

Breathiness can be linked to many things, some of which include:

All of the above could apply to Polly but understanding the tendency for her speech to be delivered in a light and breathy tone we can expect that of Polly’s singing voice too, highlighting cricothyroid muscle (CT) dominance, aka head voice dominance. It is likely that Polly is missing a genre of richer sounds from her vocal library – ones which are more chest voice driven and, therefore, thyroaretnoid muscle (TA) dominant. We can help introduce Polly to more TA driven noises in a way which is not too overwhelming through the medium of primal sound.

In the lower section of our voice, we can call out sounds such as: HEY! OI! UH-OH! WAIT! STOP! all of which can be assigned an emotional underpinning. I like to connect the sound or phrase to something relatable for the student. For example, if they have a pet dog who likes to chew on their favourite trainers I might get them to say: STOP IT, ODIN! (that’s the name I would give to a dog, by the way; bit of a Marvel fan), or get them to imagine their dog trying to steal their favourite food off of their plate: THAT’S MINE! or GO AWAY! or GET OFF! I might even play the primal sounds ball game that I outlined in the ‘Sally Simpson’ case study to add that element of fun.

These sounds can then be taken onto a scale pattern, targeting that lower, chest voice range initially. So, for Polly, we could get her to sing: ‘GO AWAY, STOP IT!’ on a 3-tone ascending scale (especially as these include some harder consonants which are great for working better vocal cord closure), beginning at approximately G3 or A3 and moving up to around the F4 or G4 mark, each time using the emotion and scenario to drive the sound.

Singing has been proven medicinal for many, including asthma, Parkinson’s and depression sufferers. We aren’t trying to change Polly as a person but, the benefits that singing boasts in terms of confidence building and lowering levels of anxiety may well challenge some of the unease and timidness that she experiences, and positively impact other areas of her life. Where appropriate, we could also extend our encouragement by offering performance opportunities, even if it’s a few lines sung to our next client, or to her parents at the end of a session – maybe even a duet performance at a karaoke or open mic night.

As we know, not all exercises will work for every voice as each singer is individual, so don’t be afraid to experiement with how you approach working with your ‘Polly Peters’.

If you have any questions or comments you can find me and the BAST Trainers in the BAST Facebook Group. To join click button below.