Vocal cords or vocal folds? - BAST - Be A Singing Teacher Skip to content 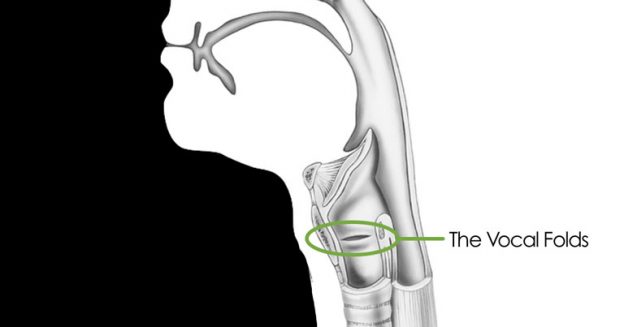 In The larynx, home of the voice! we looked at the outer aspect of the voice box, this time we move inside the larynx and take a look at the sound making apparatus, the vocal folds.

Where are the vocal folds?

Housed within the larynx are two band-like structures, which stretch horizontally across the opening of the trachea (windpipe). These bands are called the vocal folds, also referred to as vocal cords. Both names are correct, though in the medical world the former title is more accurate.

What are they for?

When we breathe the vocal folds are in an open state (abducted). When we swallow, cough and make sound they draw together and close (adduct).

As we swallow the larynx rises up and the vocal folds close. A flap called the epiglottis (see The larynx, home of the voice! for more info) moves down over the top of the vocal folds to help them keep food and fluid out of the trachea, and ultimately the lungs. This is vital for our survival. If the swallowing mechanism is faulty we could choke and ultimately die – bad thing!

When air from the lungs is blown between partially closed vocal folds they vibrate and produce sound.

Note you can see some of the rings of the trachea (windpipe) in the left picture.

The vocal folds: in singing

In order to produce the wide range of pitches used in singing the vocal folds need to:

Vocal fold density and length is achieved through a complex set of movements made by several sets of paired muscles attached to and around the vocal folds. These muscles are categorised as intrinsic muscles i.e. ‘inside’ the larynx.

Following are some of the intrinsic muscles and their corresponding movements

The Thyroarytenoid (TA) and Cricothyroid (CT) muscles are major players when it comes to singing. The TA is more dominant in the lower end of our range (sometimes called the chest register) and the CT muscles help us to access the upper part of our range (also called the head register). When we speak we are mainly using the TAs and if we make a high “Wheee” sound then the CTs have been engaged.

As the pitch rises the vocal folds vibrate faster, they also lengthen and thin out. The opposite occurs when the pitch descends.

What are vocal folds made of?

The vocal folds are made up of a very special tissue, which can withstand vibratory movement, known as oscillations, of over 1000 times per second (Hertz/Hz). Imagine if you rubbed two fingers together at such speeds, you would end up with a friction burn.

There are several layers involved from outer epithelial tissue to the ligament and the deepest layer, which is muscle.

The high F(6) in the Queen of the Night’s aria “Der Hölle Rache kocht in meinem Herzen” from The Magic Flute will have the vocal folds oscillating at 1396Hz, get your head around that if you can! Check out the sublime Diana Damrau in this role.

At middle C(4) the vocal folds oscillate at 261Hz. The normal speaking voice of a male they oscillate between 85-105Hz and a female between 165Hx-255Hz. So as you can see when we speak the demand on the vocal folds is much lower than in singing.

Ultimately knowing all about vocal anatomy will not make you a great singing teacher but it will help you to understand what the instrument can and can not do and how to help your students gain control over theirs. This knowledge will not replace ‘artistry’ or ‘creativity’ but the will inform and facilitate them.

This one is a video of the vocal folds of four singers as they sing…fun for the vocal nerds!

Here is a very high note from soprano Mado Robin. At the end of the piece she sings a Bb6 = 1864Hz (phew that’s high)

And for the opposite end of range listen to Avi Kaplan, singing here with Peter Hollens in this beautiful arrangement of Black Is The Color Of My True Love’s Hair