How to nurture a singer’s authentic voice 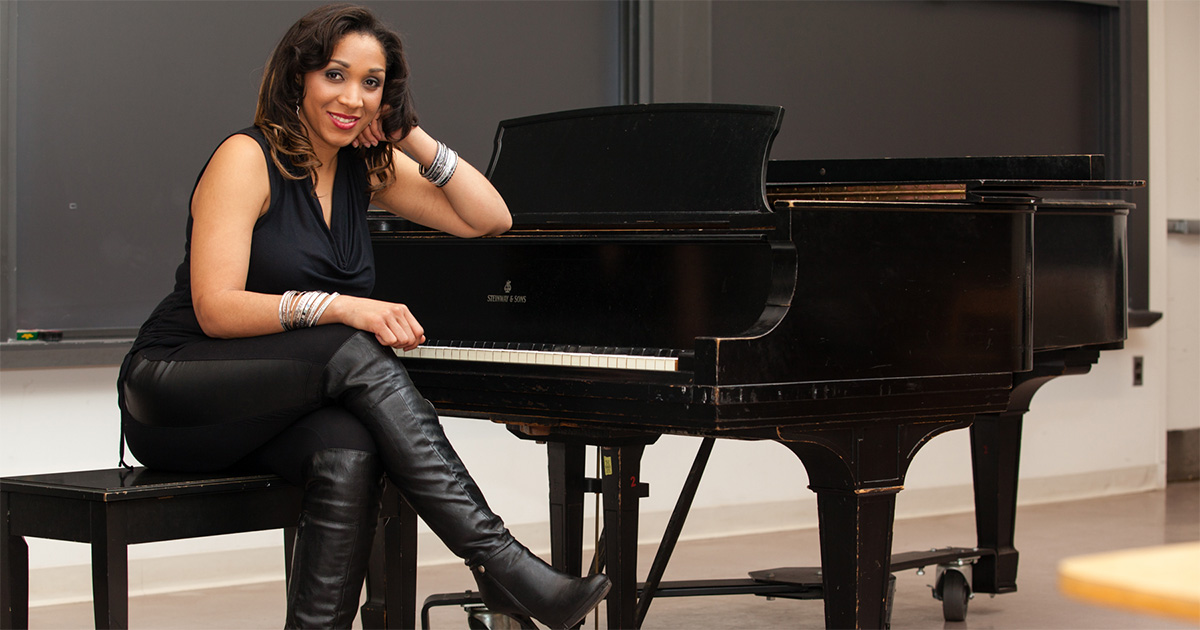 How to nurture a singer’s authentic voice

Dr Trineice Robinson-Martin is a singer and voice teacher with one helluva CV.

A specialist in African American folk-based music, Dr Robinson-Martin has completed several undergraduate, masters and doctorate degrees in music studies, and is a certified instructor of Somatic Voicework: The LoVetri Method.

She is also a faculty member at Princeton University, the author of So You Want to Sing Gospel and the founder of Soul Ingredients. This teaching methodology encourages singers to embrace their individuality and to communicate their story authentically using different vocal styles.

BAST’s Alexa Terry spoke to Dr Robinson-Martin about her teaching experiences, Soul Ingredients and the boundary between appreciation and appropriation.

Can you describe your journey to becoming a singing teacher?

Once I got my first masters, I was trying to figure out why I did not sound culturally viable in the music that I performed the most. I’m a preacher’s kid, and there was this concept that my cousins could roll off the couch and tear the church down, but I needed to sound ‘trained’ – whatever that meant.

I would get these comments from church: ‘you’re too safe’ or ‘you’re too much in your head’. I didn’t know what that meant, and no-one could articulate it. I went on a mission to redefine what a ‘trained’ singer meant in the context of the styles of music that I sing. What are those things that make me sound too jazzy when I sing R&B? Too gospel when I sing jazz? Or too jazzy when I sing classical? What is it that is missing out of the academic canon? That’s what brought me to where I am now.

What are the three main ingredients to soul and gospel styles, and what are the biggest obstacles that singers face in their learning?

‘Authenticity to self’ is the ability to have conviction in what it is that you’re saying. You can be technically sound, but if you cannot express it in a meaningful way, sit down!

Author Gwendolyn Waldron did a lot of studies on Rosetta Tharpe, who was one of the creators of rock ‘n’ roll and who came out of the church. Waldron said the one thing you can tell is that in a church, the virtuosity lies in one’s ability to bring an audience to a collective sense of joy, sorrow or celebration. That’s the skill – not the ability to riff; that helps, but the skill is in the story.

Making this emotional connection is an obstacle people face, especially if they come from academia because the more trained a person becomes, the less they know to develop this part. People who have not had formal training tend to have that part, but don’t have the flexibility and the stamina that voice training gives you.

The parameters, particularly for Contemporary Commercial Music (CCM) learning, must be from the standpoint of creativity and creative expression. You’re training people to express themselves in different modalities and using different influences based upon who they are – and making sure that they’re not using salt to make something sweet.

At the root, it’s just communication. I’m not teaching you to be ‘soulful’ from the stereotypical aspect of what that means, but I am teaching you to recognise what you want to say and what musical characteristics will help you do that in a way that’s going to be more authentic.

I’m not going to pre-determine the parameters of what a recipe is supposed to look like. Why? Because then it won’t be you. And if it’s not you, it’s not worth doing. If we are going to train CCM artists, we have to get out of the model where they walk into a situation where a character is already defined for them. This is part of my mission.

Your Soul Ingredients methodology encourages the artist to embrace their individuality to find their authentic voice. How do you encourage a singer to accept their sound?

We’re so accustomed to valuing ourselves based upon what’s popular or how close we are to what’s on a recording. It takes some confidence building to allow yourself to be who you are, no matter how good you are.

First, we teach them to recognise who they are as an emotive being and to see what their palette looks like. Do you have colours that are faded because they are underdeveloped? Let’s fix that. Then I use what I know about voice science and pedagogy to help them to sustain their individual sound.

You start by paying attention to the multi complexities of a simple term like ‘happiness’. The question is happiness in what context? And how does my demeanour change with the situation?

I’m led by the singer’s speaking voice and how they personally emote because I need to know what they sound like naturally to build on it.

I, by no means, want you to believe that when you’re angry, you’re supposed to sound a certain way. It gives singers confidence because they start to understand how they emote. Then, to build the skill, we expand the colour choices. Let me show you what bold colours look like, and what pastels look like; then you can start shading and dig down.

We need to recognise where they are in comparison to where they want to go. In the meantime, whilst we work on vocal development, we can help the singer to create their own versions of the songs they want to sing in a way that is authentic to them and true to how their voice is currently presenting.

If we don’t guide our students through this process of creativity in a safe space, they won’t know how to do it in the performance space, or even in the practice space.

How can an MT performer who has to adopt a predefined character use Soul Ingredients to fulfil their own identity, or bring a new identity to fruition? Do you think that exploring the piece’s contextual background is a helpful tool here?

Teachers are coming out of MT and saying that they’re darn good at singing, but they don’t know who they are outside of a character. The only difference is that whereas in MT, you might ask ‘what is the composer thinking?’, in CCM, it’s more like ‘what does this story mean in my life?’. I’m telling it from first-person perspective, and I’m vulnerable. I ask:

You recently spoke on Vocal Style Characteristics and Legacies of African American Folk-Based Music at the 2020 ViP Virtual Conference. How important is it for the vocal coach to use their platform to educate the context of musical style?

With the recent social re-evaluations regarding race and culture, it challenges me as an educator to make sure that I’m including cultural context and talking about it from more of a definitive stance in a way that I didn’t before.

The issue of cultural context is especially important when we’re looking at appropriation vs appreciation – these are questions that are coming up much more now. I cover this in Soul Ingredients so that teachers know what to look for when they’re listening, and what they’re trying to do in terms of developing singers.

How does ‘appropriation vs appreciation’ apply to the singer?

Appropriation works in multiple ways. If I were to come out as a classical singer (which I could do), it would be appropriation. Why? Because if you asked me to name ten classical singers, I couldn’t do that right now. I only have so much knowledge about the culture, the repertoire, the different styles. I have an idea based upon my years in academia, but it’s not really what I do.

Or, if you say that you’re going to learn jazz, but the only jazz song you know is It Don’t Mean a Thing (If It Ain’t Got That Swing), to me, that’s when you’re leaning towards appropriation because it’s approximating what you know about a particular style.

On the contrary, when you’re working using ingredients that makeup who you are, then it’s not appropriation, because you’re not doing it in the context of imitation.

Classical African American tenor Lawrence Brownlee is a good example. When you hear him sing hymns, you can tell he’s grown up in the church, and he’s bringing those influences. But he doesn’t sound like he’s trying to sound like a gospel singer. He sounds like himself expressing those ingredients with his voice in those characteristics. He’s not imitating some other culture to be more viable.

Because appropriation has such historical significance, from minstrels and the concept of non-blacks making a lot of money on the imitation of blacks, there’s a hypersensitivity to that concept.

The sensitivity happens when people capitalise on a black sound that would not get the same credibility from a recording industry standpoint if a black person made the same sound. With that said, if it comes out as you being you, and you have grown up in a household immersed in gospel music and soul music, then it’s ok.

How can songwriters and lyricists ensure that they aren’t risking cultural appropriation in their work?

Write in your voice. It should be how you would have a fully-fledged conversation on the topic using your words. If you as the artist can’t go into a room and be part of that culture and feel comfortable just hanging, then you’re probably appropriating. It’s not necessarily about race, as much as it is about the culture of a particular demographic.