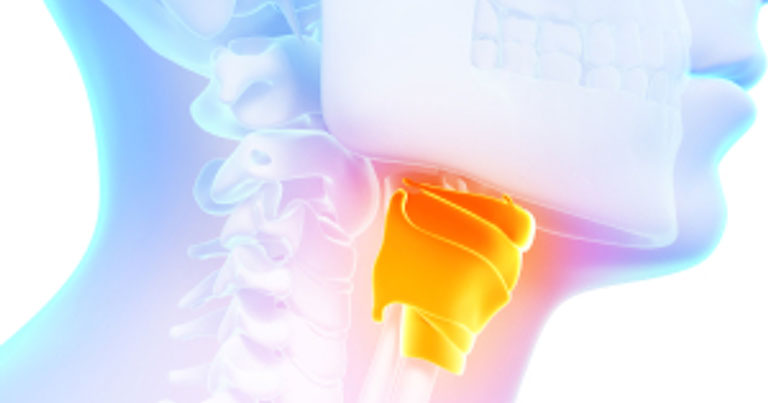 Unlike other instruments, the singer’s instrument is not easily seen or accessed. This makes teaching singing quite challenging, but not impossible.

By understanding the structure and mechanics of the vocal instrument we can help guide the singer through exercises and instruction to control the voice, access range, transition smoothly between registers, build vocal stamina, develop flexibility, sing emotively and avoid unnecessary voice injury.

This will increase the singer’s confidence. A good thing, right?

So let’s start getting to know the ‘home of the voice’.

The body of the larynx

Also known as the ‘voice box’ the larynx. It belongs to the ‘respiratory tract’ system, which runs from the nose/mouth down to the diaphragm.

It plays a very important role in breathing, swallowing and speaking. But it’s primary role is that of airway protection. Yes, that’s right, not speaking! And certainly not singing. These are just very happy byproducts.

In humans, the larynx is located where the throat tract (pharynx) divides into two.  The front tract goes to the lungs and is called the trachea (windpipe). The rear tract, the (o)esophagus (gullet) leads to the stomach.

What it’s made up of?

The structural body of the larynx is made up of cartilage. In addition, you will find muscles, ligaments, joints, nerves, and blood vessels. These are all covered by mucous membrane. When you open your mouth and look inside the pink lining you see is mucous membrane, so called as it produces mucus – funny that!

The main framework of the larynx is made up of cartilage. This includes the epiglottis, a very mobile and leaf-shaped cartilage, the cricoid cartilage which is ring shaped and where around the back sit two pyramid-shaped cartilages called the arytenoid cartilages. The arytenoids play an important role in the movement of the vocal folds, helping them to open, close, lengthen and shorten. Then there is a shield-like cartilage called the thyroid cartilage. The front part of this structure is often quite prominent in males and is more commonly known as the Adam’s Apple.

Suspended just above the laryngeal framework, though not considered a part of the larynx per se, is the hyoid bone. This structure bridges the tongue and the body of the larynx.

During swallowing the larynx and hyoid bone rise up, and the epiglottis swings down to protect the airway and the lungs, from foreign substances entering during swallowing.

If a foreign substance does accidentally end up going down the wrong way, and I am sure you’ve experienced this at some point, then the cough reflex kicks in.

The role of the extrinsic (outside) muscles is to stabilise the larynx within the throat area, and to raise or lower the larynx. This occurs when we swallow, cough and yawn. An important thing to note is that raising or lowering the larynx will have a direct impact on the vocal fold (intrinsic) muscles and therefore may impact ease of function, pitch and tone during singing.

The base of the tongue is attached to the hyoid bone so if there is tension in the tongue it will directly impact the larynx, and once again pitch and tone.

As you can see in the diagram below there are many muscles attached to into the framework of the larynx…no wonder it is hard to isolate the right ones for singing!

The extrinsic muscles of the larynx ©Bluetree Publishing

So now you have a basic overview of the anatomy of the body of the larynx. As you can see it is a complex structure. It is also a very resilient one considering what it has to do, sometimes thousands of times a day  – swallowing, breathing, talking, protecting our airway. The larynx also helps us with heavy lifting and bearing down, this is call the valsalva manoeuver.

All this before we even sing.

Understanding how these structures move, what controls them and how to optimise the function will take the singing teacher a long way to helping the singer gain control over, and develop the voice.

On the BAST 20 Hour Course, we cover functional anatomy and teach you how to assess and address functional singing issues. Check out the course curriculum for more details.

Not recently active
We use cookies to ensure that we give you the best experience on our website. If you continue to use this site we will assume that you are happy with it.OK